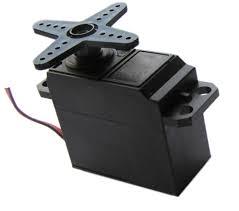 Posted by: robot Created Date: 07 May

Most students and hobbyist will use servos at some stage when building a robot. This tutorial uses Arduino sample code but the concepts are the same with any micro controller. These days there are hundreds of factories producing servos and as a result, they vary greatly in terms not only of quality but also the range of the signal required to drive them.

The original standard for the servo control signal was a pulse between 1000uS and 2000uS in width that was repeated every 20mS with 90º being a typical range of rotation. Now hobby servos often have a rotation of 180° and can accept pulses from as low as 400uS to as high as 2600uS depending on the make and model.

So now when you build a robot with servo you really need to test the servos to determine what signal range is required. If you send the servo a signal outside of it's range then for some brands it can force the motor to stall and eventually either the motor or the motor control circuit will burn out. Even if your signal is within the servos range it is still possible to burn it out if your robots design does not allow the servo to rotate fully.

The best way to solve this problem is to manually test each servo in your robot before you start writing your code. The attached sample code will work with most Arduino or Arduino compatible controllers. It is currently configured for 8 servos but that is easily changed by redefining the constant "servos" at the start of the program.

At the start of the program, the array svpin[] is used to specify which digital IO pins your servos are connected to. Change this to suit your project.

To begin with we set the values for svmin[] and svmax[] well beyond the range of most servos to prevent the Arduino library from limiting you during testing. Once you have tested your servos these values should be updated to prevent future damage.

Plug a pot into analog input A0 and adjust the last line to suit the servo you are testing. Upload the code to your controller.

Pay attention to the serial monitor as you adjust the pot and write down the minimum and maximum values of servo travel. You may also need to check your center position. If you try to push a servo too far it will often become noisey and perhaps shake a bit. Even if the servo does not become noisey or shake, you will know the limit when increasing or decreasing the postion value does not cause the servo to move.

Once all your servos have been tested you can put the min, max and center positions in your code. It should be noted that temperature can affect minimum and maximum settings a bit so if your absolute min and max positions were for example 600uS and 2400uS then you should really set them to 700uS and 2300uS to allow a bit of a buffer.