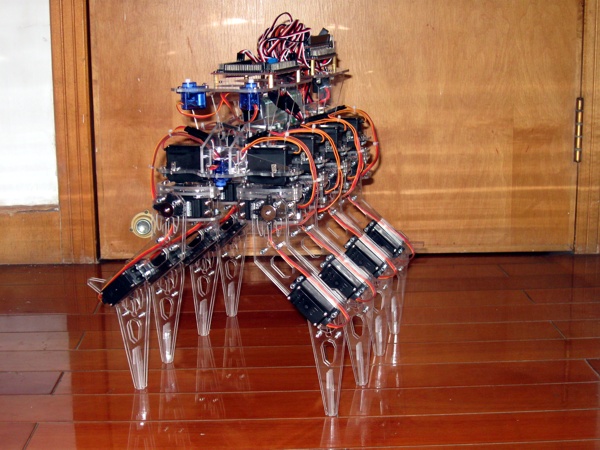 Posted by: robot Created Date: 07 May

Originally Chopsticks was simply a variation of Frits's hot glue and paintstick philosophy intended on showing students that household objects such as chopstickss can be use to build a robot.

Now I am developing a kit version for those who do not want to mess around with polymorph and chopsticks. The body parts are CNC machined from 3mm (aprox. 1/8th inch) thick polycarbonate and incorporate the unique feature of an adjustable suspension system in the leg pieces. This protects the servo gearboxes from damage due to sudden impacts and even poor coding.

The new videos show my robot carrying a 1.15Kg payload of polymorph and in the second video it is trying to drag a chair! You can see the polycarbonate legs twisting under the load but no damage is done!

The new robot is similar in design to the original Chopsticks robot but is slightly larger and designed to accept either 1 or 2 Spider controllers. I am developing sample code that will allow 1 processor to deal with eyes, personality, navigation and mapping while the second Spider controller acts as a slave processor controlling the leg movements and accepting inputs from the leg sensors.

Two Spider controllers means 140 I/O pins which includes 32 analog/digital pins. I plan to use as many of these I/O pins as possible for touch sensors and close range IR sensors so that the robot can detect sudden drops and objects not in range of the navigation sensors.

The three oldest videos show some simple test I did with the prototype. I am developing a new walking routine that should be easier to use and with a greater range of movements. No inverse kinetics are used. I use a relatively simple algorithm and integers only. This allows the processor to calculate the servo positions much quicker although with less precision.

Currently my robot is overweight. As such the thigh servos are struggling to support the weight. The main reasons this robot is heavier than the original Chopsticks is the use of metal geared servos for all the servos and the fact that unlike the polymorph version, this robot is held together by a few hundred steel nuts and bolts.

For now I have been taking advantage of the weight to test various walking gaits. Basically the more legs you have on the ground at any one time, the more weight your robot can support but sometimes it can reduce the maximum speed of the robot.

The newest video shows a gait where 6 legs are on the ground at all times while 2 legs are lifted and moved forward. This gives good support for the bodyweight and I have managed to acheive the same speed as my earlier gait where 4 legs were lifted at once.