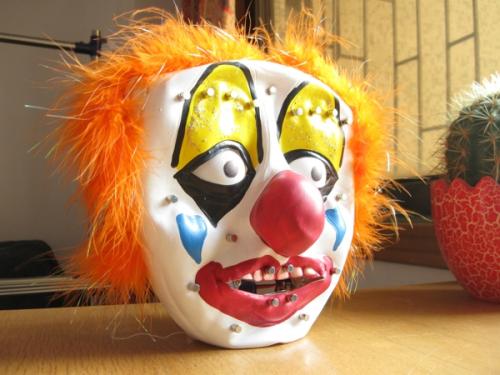 Posted by: robot Created Date: 03 May

Attachment Size
This animatronic head was created for a demonstration to inspire contestants in a local competition. I put a fair bit of effort into the design so I am now hoping to make this into a kit.
If we sell it as a kit then it might come with fewer servos and clutches to keep the price low. A minimum of 4 servos will opperate the eyes and mouth. From there a customer could order more servos and clutches if required.
I started off with drawing it in Google Sketchup.

I then exported drawings for each part and prepared the drawings for the laser cutting factory using Corel Draw. As this is a prototype I did have a few holes missing or in the wrong place but no major mistakes.

Unlike a real head, this head does not have a jaw that moves up and down. It does however have two servos to control the lips to express different emotions plus another servo that can be used to make teeth behind the lips move up and down when speaking or poke a tongue out between the lips depending on the users preferences.

There are 4 servos available for the eyes. The idea is that you will have one servo for each eye to pan left and right. As the eyes are individually controlled, you can make the eyes cross as well as looking left and right. Each eye can tilt up and down independantly but you can also tilt both eyes together with one servo and then use the other to make them blink assuming I can get 40mm diameter table tennis balls for the eyelids. These days 38mm are the most common.

There are also 4 servos for the eyebrows. Only 2 are needed for basic expressions but having 4 will allow an eyebrow to be raised quizically along with other possible expressions.

The controller shown in this photo is the new DAGU mini driver. This is basically an SMD version of the Magician robot controller used in the "Playful Puppy" robot kit.

The kit is designed to use table tennis balls for eyes. I will install them soon and make a video or two. I have some rubber halloween masks to fit onto the head. I'm thinking the clown mask will work best for the eyebrows.

Until now I was not 100% certain that the Mini Driver could handle 12 servos with 4 of them being powered from the onboard 5V regulator and driven from pins that are normally analog inputs.

My initial testing code has now shown that it is not a problem. Although the head currently has 11 servos i have allowed for a 12th, larger servo to pan the whole head left and right. This has now pushed the servo library to it's limit for an ATmega8A.

I still have 2 unused motor outputs. I will probable fit a small fan to one so the head can blow out a candle. The second motor output will either drive a shaker motor to simulate shivering when cold or it can drive some bi-coloured LEDs to make the eyes glow.

I have the head going through some basic expressions. The mouth gave me a lot of trouble and still does not work as well as planned. I think a small re-design is required. For now I have not added the eyelids, I am going to use the clown mask at first and have some different plans for the blink servo.

I'm going to try using small neodymium magnets to mount the mask. by glueing them into the mask and mounting them at key points on the head I hope to make it so that masks can be easily removed or swapped.

After experimenting with different ideas for the mouth and eyebrows I have now updated the design and fitted it with magnets so that a mask can be easily attached.

In the photo above, the mask is only held in place with magnets for testing. Once I have the head working well then I will glue the magnets on the inside of the mask. After that the mask will be easy to attatch and remove.

I've now glued the magnets on the inside of the mask except for the eyebrows. I might try something different with them to get more movement.

I took a photo of the mask with the magnets on the outside first to record their location. I then held the mask up to the light and guesstimated the corect locations using the photo as a guide and marked the locations with a pen.

The magnets are glued with super glue as that is the only glue I have right now. they seem to be sticking better than I thought although I did accidentally rip one off in the first test fit. Hopefully the bond will strengthen a bit overnight.

As you can see here, I've had to raise the anchor points with more magnets. The next version of the laser cut head will use layers of laser cut material instead. The chin anchor points were not used for this mask as it has a big mouth and they were restricting movement.

The idea of the magnets is that it makes the mask easy to remove or swap. As long as you get them in the correct place to begin with then they also make it quick and easy to put the mask on. It automatically lines itself up!

Still had flexability issues so I cut the mask up! Works much better now!